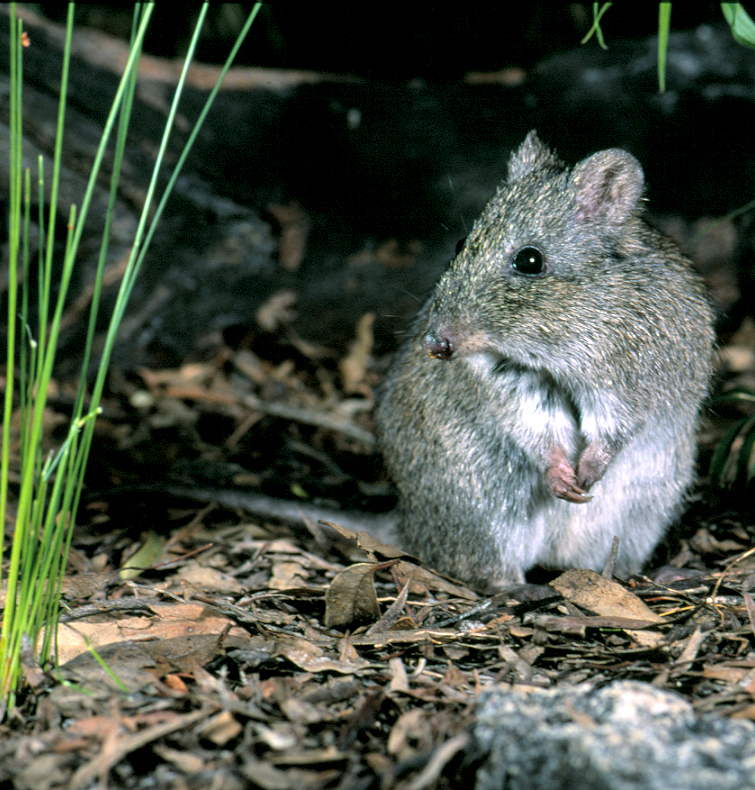 Potoroos belong to a small family called the Potoroidae (rat-kangaroos), within the large superfamily of kangaroo-like marsupials, the Macropodoidea. The rat-kangaroos are small marsupials which hop on their hindfeet, dig for much of their food with well-developed forefeet, and have a complex stomach that allows them to extract nutrition very efficiently from their diet. The Potoroidae contains two small genera - Bettongia, (the bettongs, such as the Burrowing Bettong or Boodie and the Brush-tailed Bettong or Woylie) and Potorous, containing the potoroos.
‍
Altogether, five types of potoroo have been described. Two of these, Potorous tridactylus tridactylus from south-eastern Australia and Potorous tridactylus apicalis from Tasmania, are regarded as subspecies of the Long-nosed Potoroo, P. tridactylus. In the wet forests of Gippsland in Victoria and southern New South Wales, a few hundred Long-footed Potoroos, Potorous longipes, hang tenuously onto existence. The Broad-faced Potoroo, Potorous platyops, was the only potoroo known to live in semi-arid habitats, but no living animals have been recorded since the 1870s, although the sub-fossil remains that have been found show that it was widely distributed in southern and western coastal parts of Australia. Gilbert's Potoroo, Potorous gilbertii, is the fifth member of this exclusive group.

Gilbert's Potoroo is a medium-sized mammal slightly smaller than a rabbit and bearing some resemblance to a Quenda or Southern Brown Bandicoot (see sightings page). It has a dense coat of soft grey-brown fur. The tail is lightly furred, and curls up tightly when the animal is at rest. When standing, the animal has a hunched appearance and its eyes appear to look obliquely upwards. The sides of the face are furred giving the appearance of heavy jowls and the snout is slender, curving slightly downwards as in other potoroos. The ears are rounded and almost completely buried in the fur.

The forefeet have long curved claws, forming strong digging appendages that are also able to handle food items with great dexterity. The hindfeet are long, as in the other members of the kangaroo family. Gilbert's Potoroos place their fore-feet on the ground when moving slowly, but hop on their hindfeet when moving rapidly.

The preferred habitat of Gilbert’s Potoroo at Two Peoples Bay before the fire was tall shrubland dominated by Melaleuca striata between 1.5 and 2 metres tall, forming a 70-100% canopy cover over dense sedges including Lepidosperma and Anarthria. This grows on deep sandy soil on the slopes of valleys that run between the granite ridges on the rocky Mt Gardner headland. The potoroos nest during the day and at times during the night in bowl-shaped depressions beneath the spreading sedges, generally well hidden beneath the shrub canopy.
‍
The only detailed historic account records the species living in dense vegetation of different species composition lower in the landscape. The original collector, John Gilbert (quoted by Gould, 1863) reported that the Potoroo was found in "the dense thickets of spearwood and rank vegetation bordering swamps and running streams" and that it was "the constant companion" of the Quokka Setonix brachyurus. Quokka populations occur in all areas on Mt Gardner where potoroos have been found as well as on Bald Island and in the Waychinicup enclosure and it is likely that many of the runways used by Gilbert's potoroo are 'dual-use pathways' maintained by the larger Quokka. Prior to the 2015 fire vegetation that formed potoroo habitat at Two Peoples Bay had not been burnt for at least seventy years and it is likely that long-unburnt areas are necessary to support the species. Research being conducted by DBCA scientists at Two Peoples Bay since the 2015 fire is, however, investigating how and when the Potoroos begin to utilise the recovering burnt vegetation to better understand the vegetation fire age requirements of the species.
‍
Prior to the fire at Two Peoples Bay, trapping and radio-tracking showed that Gilbert's Potoroos lived in small groups in the patchy habitat. The colonies were isolated from each other but dispersing sub-adult animals and some older males moved between them. Amongst resident animals there was little overlap in home range between animals of the same sex, but there strong overlap between males and females. Gilbert's Potoroo males had home ranges of 15-25 ha (measured over two weeks in summer), whereas females, young-at-heel and sub-adult animals of both sexes moved within only 3-6 ha.
‍
An intensive radio-tracking survey funded by a State NRM grant to GPAG and conducted by DBCA with assistance from GPAG and community volunteers in early March 2020 investigated the habitat use of the Potoroos in the Waychinicup enclosure to discover which kind of vegetation the potoroos prefer, how much area each Potoroo needs and how much their ranges overlap. This will help DBCA scientists select sites for future translocations and work out how many Potoroos could be supported in a particular area.

The fruiting bodies of underground fungi (sometimes called "truffles") make up over 90% of the diet of Gilbert's Potoroo, all year round. Other food items, such as berries, fleshy seed-pods and insects are sometimes eaten but only in small quantities. This diet makes Gilbert's Potoroo one of the most fungi-dependent mammals in the world. Truffles contain the spores of the fungus but, unlike mushrooms, toadstools and puff-balls, do not open to disperse them. Instead, these fungi disperse their spores by placing them underground in attractive nutritious morsels to be dug up and eaten by mammals. The spores pass through the gut and are dispersed far from their origin in the faeces of the truffle-eater. Gilbert's Potoroos feed by digging truffles mostly from the upper 10 cm of the soil. In doing this, the potoroos leave small diggings but these are hard to tell apart from those of bandicoots.

A study by Honours student Vinh Nguyen (2000) found spores from 44 species of fungi in the faeces of Gilbert's Potoroos at Two Peoples Bay. Five of these spore-types were found to be consumed by over 60% of animals in all seasons of the year.

The age of sexual maturity for Gilbert's Potoroo is known only approximately. Females can produce young at 750g, when they are less than 12 months old, but males apparently do not mature until they reach around two years of age.

Female Gilbert's Potoroos can produce young at any time of year. Young are born 4-6 weeks after mating and are approximately 1 cm long at that stage. They spend three to four months in the pouch before coming out for the first time at around 150g body weight. Within a week, at around 190g, they have permanently left the pouch, although for around a month they will still suckle from the mother. Young potoroos begin to eat solid food as soon as they leave the pouch and over the next few months they gain, on average, 6g/day. They remain in their mother's home range for another month or two but at about six months of age, when their weight reaches 500-600g, they will leave.

Gilbert's Potoroos exhibit embryonic diapause, whereby the young conceived can develop normally or can be kept in a temporarily suspended state of development until the young in the pouch either dies or exits the pouch at which point their development resumes and they are born shortly afterwards.

The age of captured Gilbert’s Potoroos can be estimated through a combination of tooth eruption and wear and all wild caught animals are aged by DBCA scientists at first capture. Based on over 25 years of field data as well as data collected from animals in the former captive colony, it has been established that Gilbert's Potoroos are relatively long-lived with some wild individuals known to survive for at least 10 years.